113 boats at the start, coming from all over Europe and beyond. 606 miles to sail in the most suggestive area of ​​the Mediterranean. Malta, the Strait of Messina, the Aeolian Islands, the Egadi Islands, Pantelleria, Lampedusa and back again to Malta to the finish line. As a regatta it is probably second only to the Fastnet, which I had the chance to join aboard the Cookson 50 Endlessgame; it may be second if you consider  participation and history, but certainly not as far as spectacularity and difficulty are concerned.

During the 40th edition, I went aboard the ICE 52 Prima Vista, owned by Yachting in Sardinia Shipping. Gabriele Bruni was supposed to be the skipper, but he had to change his plans at the last moment and Pietro D’Alì took the lead.

I checked the weather forecast along the four days before the departure, and it was quite unusual: a SE wind flow on the southern Mediterranean due to a low pressure centered on the Balearics and slowly proceeding eastward. The whole race was then dominated by the Scirocco wind, which was very light at first up to Messina, then got very unstable up to the Egadi, and finally rough up to almost stormy upwind for the last 240 miles. Light tailwinds didn’t favour us: Primavista is a splendid cruising regatta boat, but only the most  lightweight boats are favoured with little wind in their sails.

The regatta start from Valletta bay is an unforgettable experience: the cannon shot echoes between the city walls, the boats, almost motionless, cut the starting line and begin to cross wearily in order to leave the bay. The wind, three or four knots at most, was coming from the entrance of the bay and forced us to sail upwind. We hardly managed to sail between the two Rolex buoys and then headed to Capo Passero. The extremely light wind didn’t help us, we had to take a decision: according to the forecast, there was a windless water area between Capo Passero and Malta… the question was whether to cross it or to go around it. I awaited for the latest weather update, then we decided not to go around it as it was too dangerous, even though according to the route course it would have meant having an edge: we preferred to get close to Sicily  without delay and to look for land breeze. It eventually came at 2 am and gave us a nice big push to the North. We moved away from the coast in the morning, then the east breeze reinforced by the Fohen winds from Etna which pushed us towards the strait and made us hoist the jib top for a couple of hours. Once we passed the Etna, we hoisted the gennaker and began to tack by gybing. Black Pearl got back in the game from east – a very fast Carkeek 47 that tried to bypass the windless waters in light breezes and passed us a couple of miles ahead. Having Black Pearl so close clearly proved that our strategy didn’t work out. Meanwhile the wind came up slightly and we got close to the Swan 42 Be wild, the fastest yacht during the first part of the race with little winds, and managed to pass it in the Strait. Messina turned out to be complicated as usual: we sailed foul tide, we were forced to tack very close to the rocks in order to reduce the water current as much as possible. We approached Stromboli in the evening, we gybed several times and stayed on the right side in relation to the NE wind shift. We passed Stromboli In the dark with a crescent moon, enchanted by the red blows of the Volcano. We pictured for a moment the ancient Greeks, who, with no tools and no knowledge used to admire such a spectacle while celebrating  the Volcano god. Once we passed Stromboli, the regatta regained the upper hand and we had to face the most demanding stretch, up to the Egadi Islands:  we couldn’t guess the position of our opponents since we had no satellite on board. By then all the tactical decisions were open. Unfortunately not everybody had the AIS turned on, or maybe it was malfunctioning, although this is an obligation by the sailing instructions. Nonetheless, we saw that part of the faster boats ahead had decided to head up north, in order to avoid the little wind blowing on the main route. We decided to cross the windless water area and to keep sailing to get the best approach. The light winds did not help us, we didn’t know where the others were and we were worried. We knew very well that on that side we could win or lose the regatta. We knew that from the Egadi Islands onwards tactical options would decrease.

While approaching San Vito lo Capo, we draw conclusions: that was when the winning choice had actually to pay back. AIS started displaying all the boats: we saw the Kuka 3, then the other Cookson 50 Riff Raff and Black Pearl, all of them passing us at great speed towards San Vito. The choice made so far was excellent. In San Vito, an expected drop in wind strength slowed us down a little, the most agile boats were sailing faster, but we were patient and managed to get out of it in the late evening, so we sailed upwind. Weather forecast was confirmed even if the wind speed was lower than what was initially expected, hence we tacked up to Pantelleria, Lampedusa and up to Malta. After entering Pantelleria bay, we put the jib # 3, and kept it hoisted just before Malta. The wind went up to 25 knots, but since we knew the forecast, we did not change the sail with the # 4, we knew that the wind was going to go drop down soon.

Life onboard was hard: some of us were sick, only few ate, but this is quite common when you sail upwind. Unfortunately the regatta did not give us the wonderful glides of last year. We arrived in Malta on the morning of October 23rd. Wind was dropping so we put back the jib # 2, and we tacked the last few miles along the coast together with a Volvo 70 that must have gone late in calm sea and passed us just a few miles before the finish line . Mylius Daguet2 was behind us like a shadow throughout the whole race: we managed to fend off attacks. We ended up first in our class, and sixth in the overall ranking. Only smaller boats were ahead of us, this time we left the racers behind. 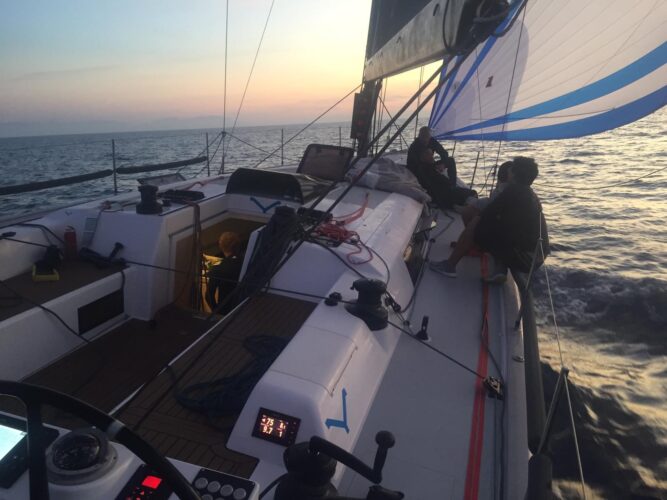 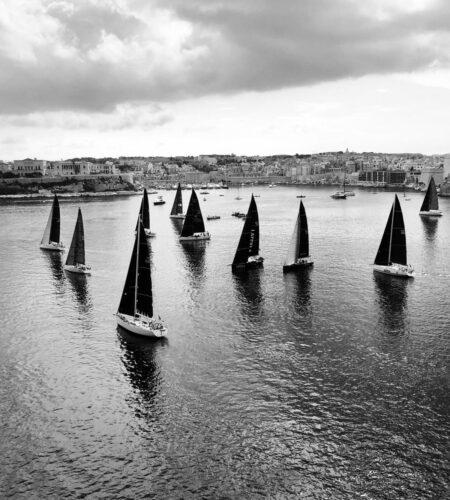 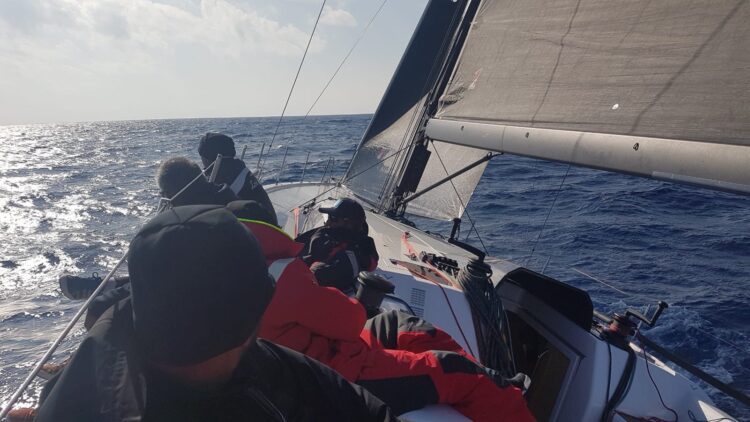 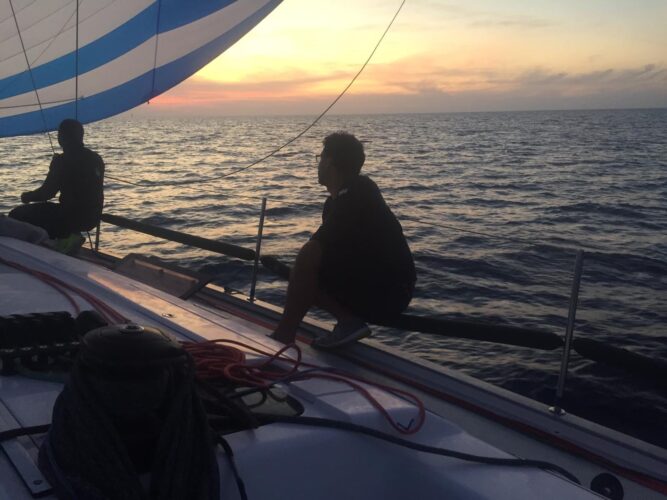 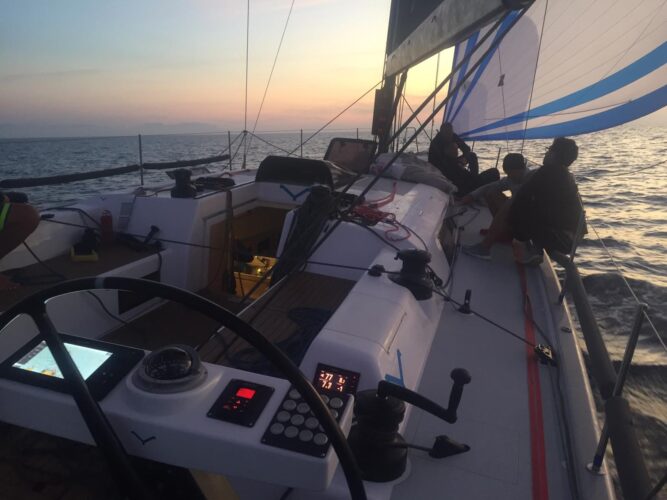 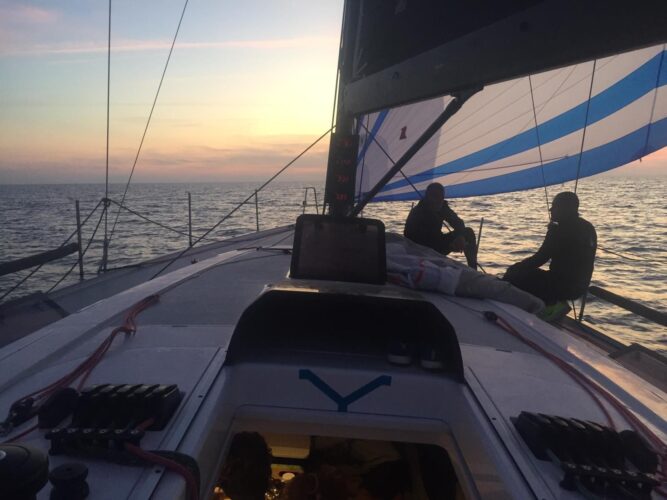 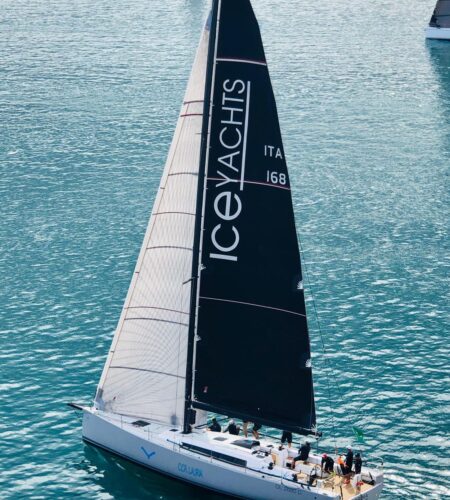 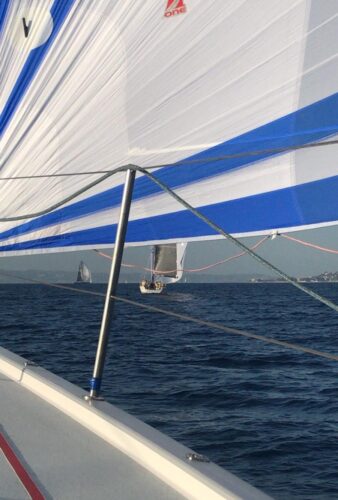 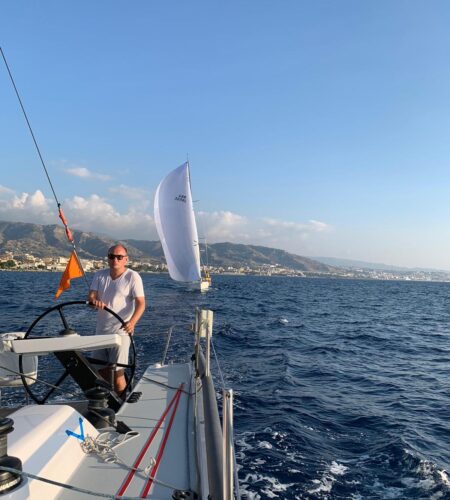